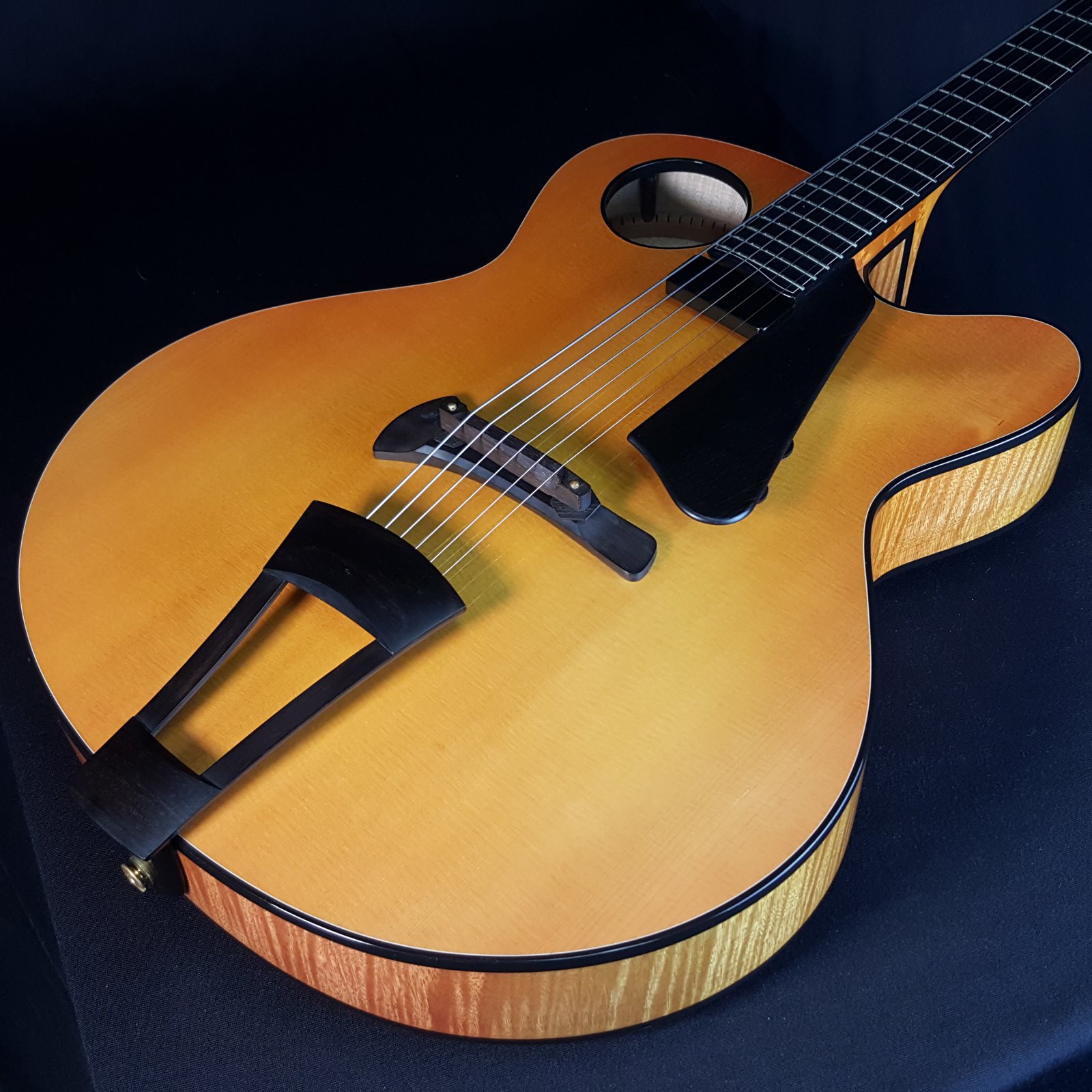 It's a revolutionary design of guitars and basses in which the soundboard is flat on the bass side & arched on the treble side.
The Halflings™ are capable of large full fundamental bass response with the ability to hear and distinguish all the notes of a complex chord when ringing together.
By combining the flat topped Steel String guitar with an Archtop the best of both worlds have been combined!

"Tom Ribbecke was born in Brookyln, New York Tom attended NYU Syracuse University Newhouse School of Communications and earned a BFA in Music and a BA in communications. He relocated to San Francisco in the early 70’s and opened his first lutherie shop in the Mission district. He is one of the premier archtop builders in the world, with a considerable waiting list and many different models of guitars and basses employing carved top and back technology. He has a reputation for creating instruments that perfectly suit his clients needs.

In 2003, Tom invented the Halfling guitar. The patented design is a unique blend of the steel string acoustic guitar and the archtop guitar that offers versatility, enhanced bass response and feedback suppression not found in any other archtop guitar. As one would expect these are superior instruments which have no compromises in playability, quality, craftsmanship and tone.

There are now two distinctly separate entities Ribbecke Guitar Corporation (RGC) which produces the Halfling guitar and Halfling bass and Ribbecke Guitars, Tom’s private practice where he continues to hand-craft truly exceptional museum quality archtops of exquisite design for which he is world famous."

Starting in 2003 RGC began building Tom's Halfling™ Bobby Vega Bass. Later, they introduced the highly lauded Halfling™ Jazz Guitar. Currently RGC builds an impressive line of guitars and basses.
Although RGC is a separate company from Tom's private practice he spends almost half of everyday here! He makes sure that we are striving for perfection in every instrument.
Tom also creates all of RGC's new designs, working closely with Mike Gutsch (Foreman) to put the designs into production. No instrument leaves our shop without his approval!