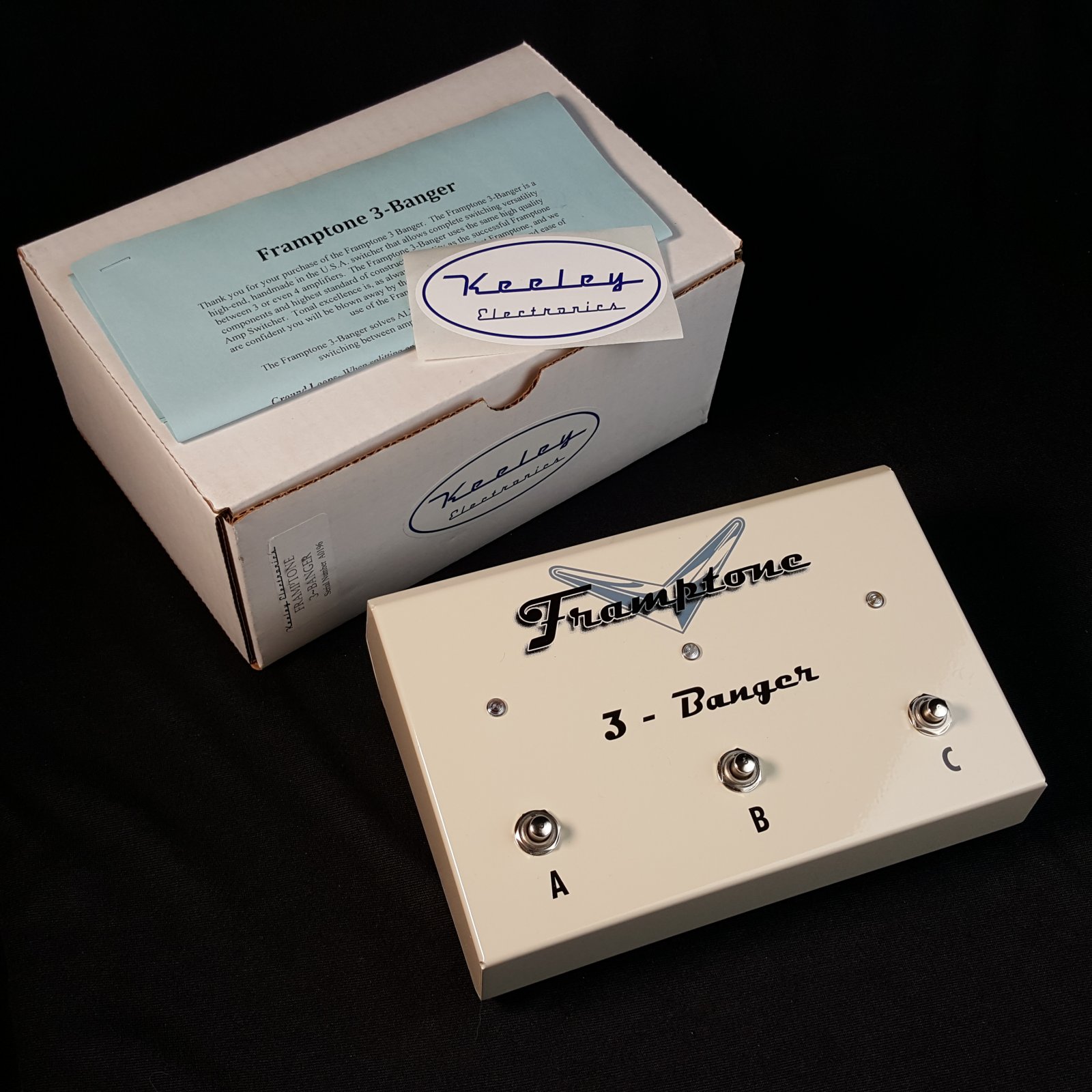 The Framptone 3 Banger is a high end amp switcher handmade in the America. It's much more than simply an A/B box. It is a non-MIDI solution to accessing the best of both “amp” worlds for a host of musicians. Its quiet-switching operation, well-crafted construction, and ease of use are among its best features.The Framptone Amp Switcher will allow you to switch between or combine two (2) amplifiers without the common problems encountered when using an A/B type box. Such problems include ground loops, instrument loading/signal loss, switching noise, and phasing.
Ground Loops- When splitting an instrument signal to or switching between multiple amplifiers, it is common to have a loud, ground hum. In the Framptone Amp Switcher, this is solved by the use of the highest quality isolation transformer, which electronically isolates the ground between amplifiers.

The 3 Bangers Solves these problems

Phasing: When combining two amplifiers, occasionally they can be “out of phase” with each other causing a thin, bright sound. The Framptone Amp Switcher is equipped with a phase-reversal switch, accessed right above the battery holder inside the unit. The ‘N’ side is for normal phase (most applications) and the ‘R’ side will reverse the phase of amplifier B, immediately eliminating the “out of phase” condition.

Operation: First, make sure both amplifiers are grounded (don’t use a 2-prong AC ground lift plug). Next, plug instrument and amplifiers into their respective inputs on the Framptone Amp Switcher. (WARNING- NEVER connect any line or speaker level signals to the Framptone Amp Switcher.) Next, provide power to the Framptone Amp Switcher by either 9 volt battery internally in unit or external AC adapter (see below). Then, turn amplifiers on. On power-up, the Red LED will be illuminated (Amp ‘A’) and the ‘A/B’ button will toggle between amps. The ‘BOTH’ button will combine both amps and in this mode, a “Last Amp On” feature indicates the amp you will return to via a flashing LED when leaving the ‘BOTH’ mode. Also, while in the ‘BOTH’ mode, the “Last Amp On” can be toggled by using the ‘A/B’ button. With instrument volume off listen for ground hum and set ground switch on the Framptone Amp Switcher accordingly. Do not associate normal instrument pickup noise with ground hum. In the event of an “out of phase” problem while in ‘BOTH’ mode, remove the bottom panel by unscrewing the four (4) rubber feet and flip the phase switch (above battery holder). You are now ready to utilize the most flexible and greatest sounding amp switcher available.

Programmable Modes: The Framptone Amp Switcher is now equipped with two (2) programmable options which can be preset to fit your musical needs. The first is the ability to change the flashing “Last Amp On” feature to a solid, non-flashing LED. The second option provides the ability to mute both amps (silent guitar changes, silent tuning, etc.) instead of combining them. Simply remove the bottom cover of the unit and set the labeled dip switches (located under battery holder on circuit board) accordingly.

Power Requirements: The Framptone Amp Switcher will provide several hours of use with a quality 9 volt DC battery (supplied) or you may purchase an optional 9.6 Volt DC, 200 mA, negative tip adapter (such as the Boss PSA adapter) for battery-free operation.** For extended use, it is recommended that a power adapter be used to avoid disruption of signal due to battery failure.**